Arianna is really in deep love with the rock, that rock sound that is rooted in blues, soul and rock’n’roll. She already appeared on many festival stages, as the Pistoia Blues, opening in 2015 the concert of Counting Crows, and participating in numerous other festivals such as Asti Music, Tropea Blues Festival, Festivalshow. With nearly 100 gigs a year, Arianna has played all over Italy and also someconcert abroad, promoting her show with the quintet, namely Arianna Antinori (voice), Carlo De Bei (guitars), Giovanni De Roit ( guitar), Manuel Bisetto (bass) and Pablo Drummadores Bertorelle(drums). In 2015 the release of the first single, Shut Up, remained in the top rank of emerging artists for 10 weeks, and now the new single is I Give, song included in the compilation ‘Pistoia Blues Next Generation 2015’, an explosion of rock and energy, with the Arianna magnetic voice emerging from from a basis of high-impact sound. Born in Rome in 1981, she lived for many years in Vicenza, and is also considered the Italian Janis Joplin not only for the strong vocal resemblance to the interpretation of the songs of the late American icon, but she is also the Italian who catched the hearts and love of Janis brothers – Michael and Laura Joplin – and the Big Brother & the Holding Company, its historical band, winning in 2010 the international contest organized on the occasion of the 40th anniversary of her death. After that important worldwide recognition, a close cooperation with BBHC was born, so close that they want her as “special guest” in their Italian concerts and even our country finally begins to notice her. 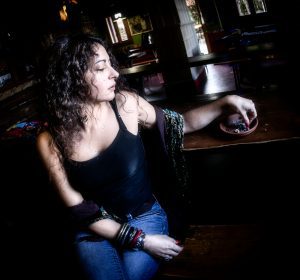 The critics start to appreciate her talent with the effect of pushing even harder on the accelerator of her live performances, because it is on stage that Arianna manages to condense even better her energy and especially transfer it to the public. With her so special voice, Arianna passes easily from scratched rock to softer and intense blues sound, creating a perfect blend with the musicians able to cancel any distance between stage and audience, both in local clubs and even more in the wide open spaces of the festival . A few years ago she felt the desire and the need to record her own songs, and so began working with Jean Charles Carbone and Marco Fasolo, extraordinary multi-instrumentalists with  several Italian and international collaborations. The album, self-produced, is notice among the experts, receiving numerous positive reviews from important critics and Italian music magazines such as: Mario Luzzatto Fegiz, Buscadero, L’Isola, Rumore and many others. In 2013 he won the prize “L’Artista Che Non C’era” with the final live concert at the CPM in Milano. In 2015, the CD ‘ariannAntinori’ is out in the whole country, of K1Records label and distributed by Self Distribution, also available on all digital platforms, while the vinyl version released on January 22, 2016. Arianna and her band are working now in 2016 for the second album.

This website uses cookies to improve your experience while you navigate through the website. Out of these, the cookies that are categorized as necessary are stored on your browser as they are essential for the working of basic functionalities of the website. We also use third-party cookies that help us analyze and understand how you use this website. These cookies will be stored in your browser only with your consent. You also have the option to opt-out of these cookies. But opting out of some of these cookies may affect your browsing experience.
Necessary Sempre abilitato